The 10 commandments of screenplay format (#5)

So if you want YOUR screenplay to be read and not tossed, apply these script formatting guidelines. Today the fifth commandment. 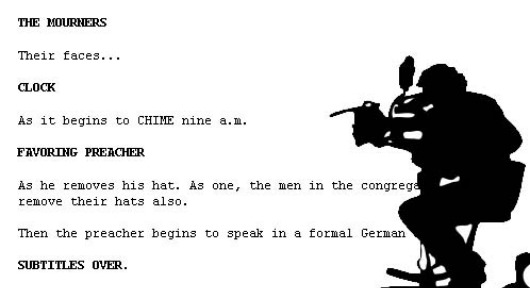 After reading this article you will know:

-- why you should NOT use camera directions in your screenplay,

-- how to direct without using camera directions

1.Why Not Using Camera Directions

Whatascript:
I've seen screenwriters filling their screenplay format with camera instructions. This seems to go against this fifth commandment. What's your take on it?

Formatman:
I've seen those. It looks often like this:

Zoom on the car. Close on Mary. Angle on Mike. The camera follows ...

After a while I'm usually left with one question to the screenwriter:
Tell me again, what's your screenplay about?

So do NOT do that. Don't use camera instructions in your screenplay format or if you do, keep them to a strict minimum and only, if you can't get the same result as explained below.

Whatascript:
There are moments you have a very detailed picture in mind and you want to convey it to the reader.

Is there something in terms of screenplay format that you can use without taking the reader out of the story he's visualizing?

Formatman:
Yes. This is called a secondary scene heading. It allows you to direct the story without using camera directions.

As we saw in the second commandment of screenplay format Master scene heading is a one line of text in a screenplay that precedes the description of a scene (e.g. INT. ADAM'S HOUSE - DAY).

It gives a context to the whole scene, as if everything that happens in it - what is seen, what is heard and where it all happens - is filmed in a single continuous shot, a master shot.

Whatascript:
In a screenplay format, what is the relation between master scene heading and secondary scene heading?

Formatman:
Within this master shot - this master scene heading - you may want to draw the attention of the reader to a sub location, a person, an object, a time period or a point of view. That's what secondary scene headings are for.

2. How to Draw the Attention on a Sub Location

Whatascript:
Let's start with sub location. Can you give an example?

Formatman:
This is an extract of the screenplay 8MM written by Andrew Kevin Walker.

In terms of screenplay format "AT THE GATE" and "ACROSS THE TERMINAL" are secondary scene headings.

Both are sub locations of the master scene heading, the master shot, "MIAMI AIRPORT, TERMINAL"

3. How to Draw the Attention on a Person or Object

Whatascript:
I noticed in some screenplay formats that screenwriters used "zoom on", "close on" and "angle on" to get the reader's attention on a person or an object.

How do you achieve that goal with secondary scene headings?

Formatman:
Let me show you one example on how Earl W. Wallace, William Kelley, Pamela Wallace did that in the screnplay "Witness".

Notice how they bring the focus on a character or an object within the scene, how they tell the reader what is important in the scene.

And they achieve all that without explicitely directing the camera.

In this extract, "RACHEL LAPP", "THE MOURNERS", "CLOCK", "FAVORING PREACHER" are all secondary scene headings. 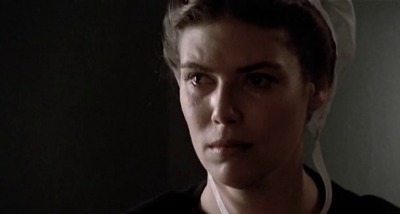 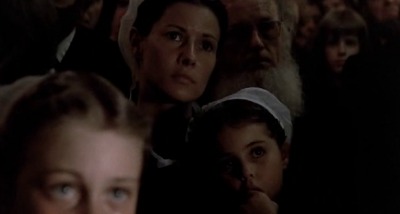 This is another example. This time from "Broken Arrow" written by Graham Yost.
In this case "A PARK RANGER TRUCK" and "A RANGER" are secondary headings.

Whatascript:
In the examples you gave, the focus was on one individual (a ranger) or on a group (the mourners).

How would the screenplay format look like if you wanted to draw the attention to two people at the same time?

Formatman:
You write the names of the characters next to each other and separate them with a slash.

You can however only do that if the characters are next to each other and can be in the same shot.

This is an example from Witness again.

Whatascript:
In above examples, our attention gets drawn to some objects - like the clock on the wall or the park ranger truck. What if you want to show something on a screen.

How to do that in terms of screenplay format?

This is an example from The Bourne Identity written by Tony Gilroy and William Blake Herron. 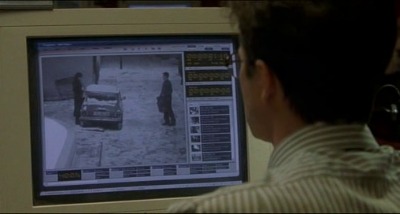 5. How to Draw the Attention on a Time Period

Whatascript:
You covered so far 2 aspects of secondary headings: how to draw the attention of the reader to a sub location and to a person or an object.

How do you use secondary headings with time?

Formatman:
Let me give you 2 examples:

The first one is from "Nick of Time" written by Patrick Sheane Duncan. In this example of screenplay format "THE TIME" is a secondary heading.

Later on, the words "THE TIME" are omitted from the screenplay format and only the time of the day is written on a separate line. 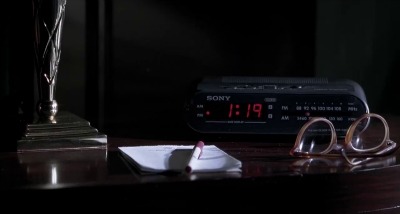 The second example is from "Erin Brockovich", written by Susannah Grant.

In this extract of screenplay format "LATER IN HER TESTIMONY" and "STILL LATER" are secondary scene headings.

See also the 2nd formatting commandment: "Thou shalt not let the reader get lost" for the use of time within a master scene heading.

6. How to Draw the Attention on a Point of View

Whatascript:
At the beginning of this interview you mentioned that secondary headings can be used as well to reflect the point of view (POV) of a character. How do you do that?

Formatman:
Let's go back to the screenplay "Witness" for an example.

In this example, Earl W. Wallace, William Kelley, Pamela Wallace chose to use a secondary scene headings "HIS POV THROUGH WINDOW" followed by a "BACK TO SCENE".

In Good Will Hunting Matt Damon and Ben Affleck just included the Point of View in the scene. This shows the flexibility of screenplay format and that all rules are not set in stone.

See also the 6th formatting commandment: "Thou shalt cut to the chase" for the use of POV with binoculars.

Formatman:
A secondary scene heading is always in CAPITAL letters and preceded and followed by one blank line (instead of two for a master scene heading).

Whatascript:
This concludes our interview on this fifth formatting commandment "Thou shalt direct without using camera directions". Thank you, Formatman.

#6. Thou shalt cut to the chase

It's all about car scenes and how to write them (e.g. inside, outside, INT./EXT., in motion) And it includes a Top 6 Common Car actions.

#8. Thou shalt use flashback responsibly

It's all about flashback. The controversy around it, 7 key components to make it effective, when to use it, and how to test ride it.

#9. Thou shalt not lose the reader in translation

Discover how to write dialogue lines in a foreign language. And deal with sign language, accent and translation.