Spice up your movie dialogue with the list technique 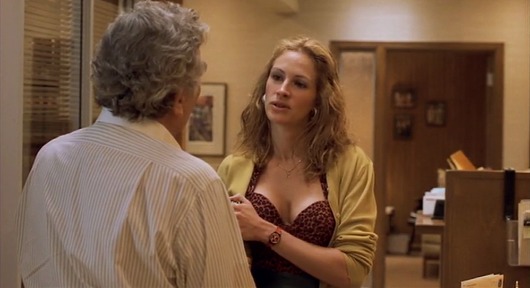 Whatascript interviews an expert to get to the bottom of this movie dialogue technique.

Meet Erin Brockovich, the main character of the screenplay of the same name, written by Susannah Grant.

What a script!:
First, many people say that writing movie dialogue cannot be taught. What do you say to these people?

Erin:
Bullshit. Fuck if I'll help these jokers spread that lie... Yeah, I'm real glad you brought that up.

You see - I don't know shit about shit, but I have kids. Learned a lot right there... 'cause they use a lot of these movie dialogue techniques: repetition, unexpected response, interruption, juxtaposition, exclamation, exaggeration, avoidance, put down, you name it.

And I'm extremely fast learner. I mean, you show me what to do, and I've got it down. Anyway, that's how I got to this list dialogue technique.

What a script!:
Can you tell us what's this movie dialogue technique about?

Erin:
It's about building a series of words, one after the other to express frustration and make a point.

What a script!:
You for sure very good at it ..

Erin:
Yeah, one of my many talents. Believe it or not, I was Miss Wichita once - Miss Wichita, for Christ sakes. I still got the tiara... I don't know what the hell I was thinking. Anyway... The list movie dialogue technique ...

What a script!:
Right. When do you use it?

Erin:
When I'm pissed off. When I really could nail people's asses to the wall.

What a script!:
How often is that?

Erin:
Let me tell you. There's very few people in the world who don't piss me off 90 percent of the time.

What a script!:
Got it. You've got an example of how you use this movie dialogue technique?

Erin:
Sure. That's the first time I meet my neighbor, George, one of those Zen gods of motorcycle maintenance. And he asks for my phone number. So I say:

And then, there is this meeting with this California power company's legal team, Miss Sanchez and Mr Buda. And they come to our office with their lame settlement proposal. That's when I knew we started to get those P & G fuckers by the balls.

What a script!:
I notice that you use this movie dialogue technique with your boss Ed too ...

Erin:
Yeah. He pisses me off too. At the beginning of the story, I phone him, again and again. And he never returns my calls. So I say - and this is the scene you see in the picture above -

What a script!:
To conclude, there is one line, which made us think of an interview we had with Prem Kumar, from the script Slumdog millionaire on the put down dialogue technique.
You ask your boss to give you a job. You stop at some point and say to his secretary who stares at you:

I was wondering, do you know, Prem Kumar?

Erin:
Yeah, I met him in Dudetown, a real shmuck.

Tell her you're not gonna be home for supper.*: