Did you know that a flat movie dialogue is one of the Top 7 Deadly Flaws of a Bad Screenplay ?

We'll show you how to avoid this flaw and write dialogues like the pros. 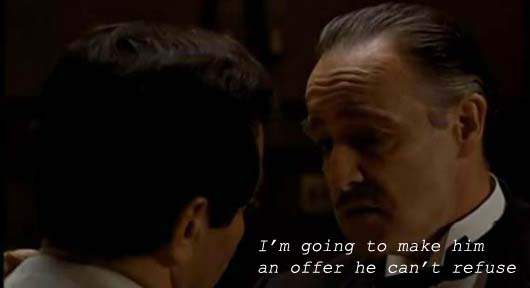 Missed the first three parts of this series? No problem. Here is the link to Part 1, where it all started.

After reading this article:

-- you will be able to write subtext dialogue.

-- you will know when to use both.

What a script!:
Blablator, what is subtext and what is its relationship to "on the nose" movie dialogue?

Blablator:
Subtext is a line of movie dialogue that reveals what a character thinks but does not say.

This is the opposite of "on the nose" movie dialogue whereby the character says exactly what's happening in a scene or what he thinks or feels or what he'll do.

For that reason subtext is also called "off the nose".

What a script!:
Why is it so important to use subtext that you made a rule out of it?

Blablator:
"On the nose" movie dialogues have a tendency to be flat and lacking depth.

Their exclusive use in a screenplay is usually the sign of beginner screenwriters and is one of the Top 7 Flaws of a Bad Screenplay.

Subtext on the contrary brings with it the world of the unsaid.
It spices the movie dialogues up and has the reader/audience being actively engaged in the story by filling in the gaps of what is expressed but not said.

What a script!:
Does that mean you should never use "on the nose" movie dialogue?

Blablator:
No. Experienced screenwriters use "on the nose" movie dialogue when it's dramatically more efficient to say what's happening exactly the way it is. But they mix it skillfully with subtext.

The point is that you should never use "on the nose" movie dialogue exclusively.
And when you use it, you should not state the obvious either (look! a car - while we see a car coming; or I'm bored - while the character (and probably the reader too) is yawning already).

What a script!:
Do you have an example of a scene where the dialogue gets first expressed with subtext and then on the nose so that we can get the difference between the two?

Blablator:
Sure. This is from A Few Good Men, written by Aaron Sorkin.

Navy lawyer Joanne Galloway tells Captain West and two other officers about a possible code violation which would have led to the death of a marine at Guantanamo Bay. She wants to investigate the case. This is West response.

First with subtext, then on the nose. 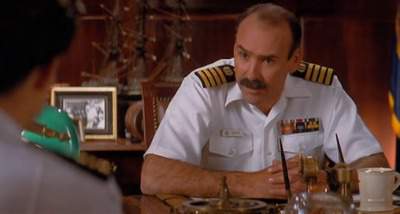 What a script!:
When do you use subtext?

Blablator:
Mostly when saying things straight would bring the character in jeopardy - he would have to face the consequences of what he says, and may lose something (including his face).

Subtext is often connected to strong emotions like love, hatred, jealousy, desire, anger, frustration. In such cases hiding one's true feelings and thoughts is more the rule than the exception. Things get implied rather than being said explicitely.

In the screenplay written by Mario Puzo and Francis Ford Coppola, Godfather, his godson, Johnny, shares with him that he will not get the main part in the Hollywood picture directed by Mr Woltz.

Don Corleone could have responded - in an "on the nose" version:

Apart from the fact that this movie dialogue line is weak - it explains too much and is unnatural, it could actually put the character in jeopardy if someone was to hear it.
So Don Corleone says instead: As we saw the Don in action before, we know that this line means trouble. And we are left wondering what will happen.

What a script!:
Can you give us other examples of subtext.

Blablator:
I'll give you a few examples from the great script of Mark Andrus, Life as a House.

This is a story of a divorced father, George, who has a few months to live. When he gets fired from his job, he decides to tear down his shack and build a house with Sam, his estranged son.

The first example of subtext regards the relationship of Sam with his father:
This is what Sam says to his father at the beginning of the story:

In itself this line has some thruth in it. George's shack is shabby. So Sam does not get into trouble when he says that.
However, the subtext is clearly "You're such a loser!".
Sam conveys the subtext by using the put down movie dialogue technique with the intention to hurt George's feelings - especially when he says "my dad" while referring to his stepfather.

Later on Sam says the following to his father:

Again a brilliant line - the subtext is "you're a nobody, you've got nothing to say."
And Sam uses this time the movie dialogue technique known as "list" to really make his point.

Fast forward: This is a few months later. George and Sam are different human beings and they have completely transformed their relationship. George is dying in the hospital. Sam wants to get into his room. 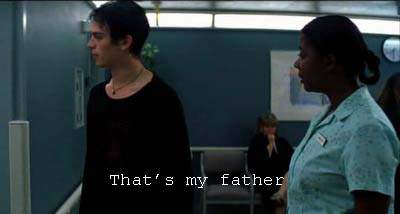 This time - the movie dialogue technique used is "telling it like it is". George is effectively Sam's biological father.

But this is the first time Sam refers to his father as such in the whole script.
And when he does, what he expresses with subtext is that he loves his father and is proud to be his son.

What a script!:
Any more examples?

Blablator:
This is another example of subtext from the same screenplay, Life as a House.

This time it's about the relationship between Sam and his stepfather, Peter.

At the start of the story they basically have no respect for each other. Mark Andrus shows it in a very effective manner in a breakfast scene. The whole family is there: Peter, his mother Robin and his two half brothers, Ryan and Adam.

When Peter says "are you wearing eye shadow?", what he really means is "I told you already not to do that in my house".
And when Sam says "have a nice flight", what he of course means is "f.u.". But using subtext keeps him out of trouble.

Fast forward: That's the end of the story. Both characters went through their own transformation.

Peter approaches Sam who stands in front of the house that he now builds with many people - including his mother and his two half brothers.

Sam looks at the house, looks back at Peter and responds: 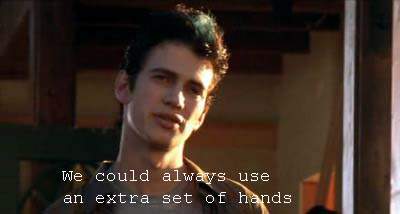 This example shows the magic of subtext. In 2 lines which are not directly related to their relationship Sam and Peter have reconciled their difference and accepted each other for who they are.

The Context Is Decisive

What a script!:
You talked earlier about subtext and context. Can you say more about it?

Blablator:
Consider that the context - inside of which subtext is used - is decisive.

Imagine a salesman. He's been busy negotiating with a customer and is very close to make a sale. His boss comes in and tells him to close the deal and it's ok to give an additional discount for that purpose.

So the salesman responds: "okay, I'm going to make him an offer he can't refuse."

In this case he says exactly what he means. There is no subtext, just on the nose movie dialogue. Yet, this is the same line as in the Godfather.

Let's take another example to illustrate this point about context:

There is this scene in Good Will Hunting written by Matt Damon and Ben Affleck when Skylar is out with Will. She wants to kiss him but does not know how to go about it. So she says instead:

In this scene of the screenplay that got cut in the movie, her lines are all subtext. She talks about Annie Hall but what she really refers to is her own situation.

Now imagine the same scene between two friends, wondering which movie they will go and see tonight:

In this case the two friends say exactly what they mean. There is no subtext.
There is no sexual tension, there is no maneuvering one's way to get a kiss, there is no embarrassment about how the other party may react, there's no fear about being rejected.

Talking about Annie Hall, there is this brilliant scene, when Alvy and Annie are on a date. They supposedly talk about photographs hanging in Annie's apartment. But the subtext which is shown on the screen tells us otherwise.
This is a short extract:

What a script!:
How to write movie dialogues with subtext?

1. First write your movie dialogue using on the nose dialogue.

2. Then look at ways to say the same thing differently, using subtext, taking into account your characters, and what we know about them.

It takes practice, but now you know how it works, you'll be able to recognize subtext whenever you read a screenplay or watch a movie.

What a script!:
One last thing. Just before reaching Dialogueville, there is this amazing rock, raising from the water...

Blablator:
Yes, it's called "The Nose".

According to the legend, the first inhabitants of Dialogueville were part of an expedition of screenwriters wanting to settle into the wild.

They had been struggling writing their adventures with well-crafted dialogues. But whatever they came up with was on the nose.

They saw the rock as a daily reminder to go beyond ordinary movie dialogue. And for that reason they settled here and named the Lake, "Subtext".

Our advice? Keep this picture next to your laptop to remind you of the power of subtext. 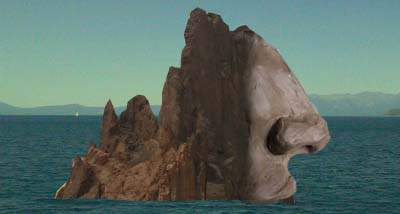