Spice up your movie dialogue with the trigger technique 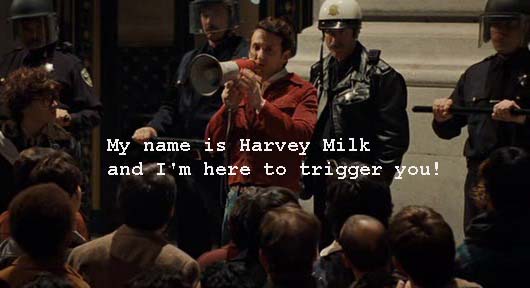 We went to see him just after he defeated Prop Six in California, a proposition aimed at firing gay teachers and school employees supporting a gay person.

And our interview started in a very surprising manner ...

Mr Milk:
Hey, I like the way your pants fit... Where are you from, kid? I'm Harvey Milk and I'm here to recruit you.

Mr Milk:
Oh yeah, the interview... I'm just curious. Are we your first stop or your last?

Whatascript:
It's been a tough one, Mr. Milk. We approached many characters but none was ready to come out and tell us about this movie dialogue technique...

Mr Milk:
Well, I didn't come out myself until very late in life. There was nobody to look up to, no hope for learning movie dialogue techniques.

Whatascript:
Mr Milk, you're a gay activist. As such you've made a huge difference for the gay rights in this country and have changed the lives of thousands and thousands of people.

You've also given incredible speeches, speeches that moved the crowds. In that capacity I would like to have your views on a few screenwriting topics, starting with the trigger movie dialogue technique.

How does it work?

Mr Milk:
Let me use a comparison to illustrate that.

What you see here in this room, all these people celebrating the defeat of prop 6, Cleve, Scott, Anne, Jim, Dick, myself, we all part of a movement, we form a chain, and all of us are an important link of this chain.

And each of us got compelled to repeat this word or expand upon it. And those who objected it are not in this room tonight.

Similarly, when you apply this movie dialogue technique you use a word that triggers a reaction by the person you speak to; the conversation takes suddenly a different turn.

The other person repeats the same word, or gives back a variation of it, expands on it, or even objects to it.

Either way, the person is compelled to do something with this word or this sentence.

A Dialogue with One trigger

Whatascript:
Can you give us some examples of this movie dialogue technique?

Let's start with one trigger.

Example 1:
I meet my future lover Scott Jackson and ask him:

Example 2:
I just agreed with the union leader Allan Baird to boycott a beer brand in the bars of the Castro

Example 3:
I speak to Rick Stokes. He's the lawyer of David Goodstein, the man who bought The Advocate, the biggest gay magazine.

A Dialogue with Two Triggers

Milk:
I'll show you now the application of this movie dialogue technique with two triggers.

Example 1:
It's my 40th birthday with Scott:

Sometimes the trigger word is the result of another movie dialogue technique.

This is an example with the "put down" movie dialogue technique.

This technique is used to hurt. In this case the dialogue becomes an exchange of fast movie dialogue lines, a bit like in a tennis match, with the ball flying over the net full speed.

Example 2:
When I started our camera shop in the Castro I wanted to be part of the Merchants association. I spoke to a liquor shop owner, Mr McConnelly, about it.

Whatascript:
In all above examples, the trigger words got repeated.

You said that the trigger movie dialogue technique can also be about expanding on what gets said. Any example?

Milk:
Sure. This is an example from my first encounter with Scott.
None of us repeat the trigger words, but we kind of bring them to the next level.

Whatascript:
Mr Milk, you've given incredible speeches. Your words moved the crowds. They made a real difference in the life of thousands and thousands of people.

Screenwriting is all about words. What is screenwriting for you? and how important is it to write?

Mr Milk:
Screenwriting is a craft. It does matter if you write. You make a statement. You say, "I'm here, pay attention to me."

Whatascript:
What is your message to people who have a talent for writing and doubt whether they should be a screenwriter or not?

Mr Milk:
You need to do what you're good at. Be a screenwriter. Fight flat movie dialogue. Fight conventional stories. Fight the people who had you come here to do something else.

Mr Milk:
What you're not getting is the spectacle of it, the bigger than life emotions... that these techniques make possible.

Whatascript:
Talking about movie dialogue, what would you like to say to all the young screenwriters who will read this interview?

Mr Milk:
No more flat dialogue. It's gotta come out of every screenplay. Gay and straight.

Whatascript:
Is there a way to know which movie dialogue lines and which screenplays are your best ones when you write them?

Whatascript:
Readers are often accused of not respecting screenwriters and the time they invest in telling a story. What's your view on that?

Mr Milk:
How can we ask the readers to respect us if we don't show ourselves some self respect and write mediocre movie dialogue?.

Whatascript:
You moved yourself to San Francisco for the gay movement and had the opportunity to give great speeches.
What do you say to the screenwriters who are told that there's no place for them if they don't move to LA? or to those who start doubting things will turn out for them?

Mr Milk:
The young screenwriters in Richmond, Minnesota, or Jackson, Mississippi, or Woodmere, New York... Who are hearing people telling them that they're wrong, that there is no place for them in this great country, in this world... They're looking to us for something ... And I say, we have to give them hope! Hope for a better world... Hope for a better tomorrow...

Talking about hope for the young generation of screenwriters who wonder if it's possible to get an Oscar when you're 34... Everyone, this is Dustin Lance Black. He's a very big deal so behave yourselves.