What if books on screenwriting were given coverage notes like screenplays so that you know which ones will empower you to avoid the Top 7 Deadly Flaws of a Bad Screenplay and have your screenplay read, not tossed

Whatascript! takes on that challenge. 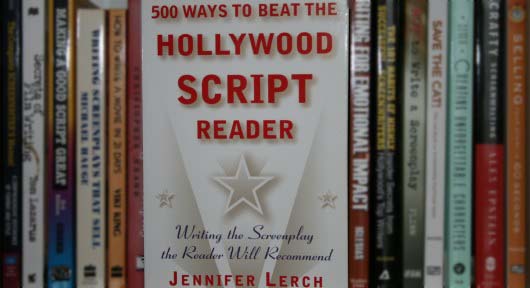 We asked our coverage expert, Michael, aka Dr. Read, to lead us through the process.

What a script!:
Dr. Read, which aspects are typically part of your screenwriting books coverage?

Dr. Read:
Basically, the same as in a screenplay coverage, that is:

These are my coverage notes on "500 ways to beat the Hollywood Script reader":

In a world where screenwriters are desperate to get a "recommend", a movie industry insider struggles to reveal a step-by-step recipe as she is pursued by the fiercest gatekeepers in Hollywood: the Hollywood script readers.

Like many books on screenwriting the story of "500 ways to beat the Hollywood script reader" happens in the current time.

A select group of college educated and culturally savvy people, called the Hollywood Readers, has gained the power of life and death on the fate of a large community of people, called screenwriters.

These Readers have been chartered by their bosses working for talent agencies, production companies or movie studios, to find the pearl in all the screenplays that land on their desk.

Their ultimate weapon? a coverage sheet using well-kept secrets to assess the concept, characters, dialogue, plot and structure of a story.

The protagonist, Jennifer Lerch, has been one of these Hollywood Readers for more than a decade. She decides to break the silence and to reveal all these trade secrets.

Other books on screenwriting have told stories of good and evil. But "500 ways to beat the Hollywood Script reader" brings a twist to it.

And the twist is that evil is not who we think it is.

Every script reader actually wants to be the one to bring his boss the next Academy Award winner. And the screenwriters are actually the ones standing in their own way of getting a "recommend" on their coverage sheet.

Until of course the protagonist, Jennifer Lerch, tell them how to do that.

Considering the number of books on screenwriting the concept - and its originality - is very important to differentiate one book from another and to hook the reader from the very start.

The concept of "500 ways"is original because it reveals all the aspects of a screenplay through the eyes of the first and often only person to make a decision about whether or not a screenplay should be given further consideration, i.e. the Reader.

And in this case, both the Protagonist (Jennifer) and the Antagonist (the Hollywood Reader) are Readers.

The writing is clear, to the point and friendly (read "not patronizing").

Like in a screenplay, boooks on screenwriting with a lot of white on the page score high on this criteria.

"500 ways to beat the Hollywood Script reader" is no exception in that matter. Its presentation makes its reading easy and pleasant, yet valuable.

Following other major books on screenwriting "500 ways to beat the Hollywood script reader" follows the three acts structure with 3 chapters:

Inside of these acts there are strong inciting incidents - read sub chapters.

Thanks to a proper and logical structure, the reader knows at all times where he is and where he is going.

The story has a great value as it clearly presents what the Hollywood Readers are looking for and are the guardians of.

It would have been great to have a sum up card as a book companion, to use it as a check list when going through one's own screenplay.


The Pitch On The Book's Back Cover

IF YOUR SCREENPLAY CAN'T GET PAST THE HOLLYWOOD READER, IT CAN'T GET TO HOLLYWOOD

This ultimate insider's guide to screenwriting is designed to get you past the fiercest gatekeepers in Hollywood: the Hollywood script readers. This small army of freelancers will be among the first to read and evaluate your script and then to recommend it -- or not -- to the studios, directors, and stars.

Designed for quick and easy access, these 500 points are a step-by-step recipe. They cannot guarantee success, but failure to follow them can almost certainly guarantee failure. Tips include:

Written by an industry insider who has recommended scripts that have sold for as much as one million dollars, this is the only book to show you what the Hollywood Reader wants to see. Clear, smart, and completely authoritative, 500 Ways to Beat the Hollywood Script Reader is by far the simplest, most practical book ever to hit the entertainment shelf.

Jennifer Lerch has been a Hollywood Reader for more than a decade, including eight years at the William Morris Agency.

Buy the Book and Beat the Hollywood Script Reader:

Go from Books On Screenwriting to Whatascript Home Page