The 10 commandments of screenplay format (#2)

So if you want YOUR screenplay to be read and not tossed, apply these script formatting guidelines. Today the second commandment. 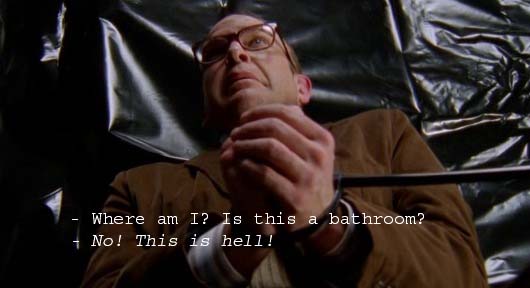 #2: "Thou shalt not let the reader get lost"

Whatascript:
The answer may be obvious, but why is this second commandment important?

Formatman:
When you hear the reader say these lines from the TV series Chuck about YOUR screenplay...

then you know the reader got lost in your story and you blew it.
Your movie script just got closer to get tossed to the pile of "Pass".

Whatascript:
How to avoid this deadly perspective?

Whatascript:
What is a master scene heading?

Formatman:
In screenplay format, a master scene heading, also called primary slug line, is a one line of text in a screenplay that comes before the description of a scene.

It gives a context for the whole scene.

It is as if everything that happens in the whole scene - what is seen, what is heard and where it all happens - is filmed in a single continuous shot, a master shot. Therefore the name of master scene heading.

Whatascript:
How does this screenplay format element look like?

Formatman:
Correct. In screenplay format, a master heading is made of:

Formatman:
You have basically 2 choices:

It is usually clear where you are and therefore which one you need to use.

Whatascript:
Why does it matter?

Formatman:
It tells the production crew if they will be shooting on stage or on location. That impacts the budget.

Whatascript:
Is it possible to combine INT. and EXT.?

Formatman
Yes. In some cases, screenwriters use INT./EXT. or EXT./INT. when a scene takes place both inside and outside. The first term used indicates where the scene starts. 3 examples:

1) From "The Cider House Rules", written by John Irving:

If you want to know more about formatting car scenes in scripts, check the 6th formatting commandment: "Thou shalt cut to the chase"

Whatascript:
Let's talk about the second element of a mastery scene heading, scene location. What is it? and how precise should you be about describing it?

Formatman:
Scene location is where the scene takes place.

You should use one or two words only to describe it. Do not include specific details of the location in the master scene heading.

You can always put these details in the description that follows the master scene heading if they are essential to the story.

The location follows the INT. or EXT. indication on the master scene heading.

Whatascript:
Let's go through some examples.

Formatman:
Sure. From Gladiator written by David Franzoni, revised by John Logan:

Whatascript:
What do you do if the scene needs to take place in a specific area of the location you mentioned?

Formatman:
You add it after the main location:

A few examples again from Gladiator:

Whatascript:
How does the screenplay format look like if the scene takes place in a vehicle in motion?

Formatman:
You add "MOVING" to the master scene heading - either before or after the vehicle:

1. Before the vehicle: this example comes from "The Cider House Rules" written by John Irving:

2. And this is an example of mentioning it after the vehicle. It comes from Witness written by Earl W. Wallace, Pamela Wallace and William Kelley:

In this case "MOVING" is between brackets.

Check out the 6th screenplay formatting commandment: "Thou shalt cut to the chase" for a comprehensive article about cars - including a Top 6 Common Car Actions.

Whatascript:
Let's talk about the third element of a mastery scene heading, time.

Formatman:
It comes last on the master scene headings, after the indication INT. or EXT. and after the location of the scene.
It is preceded by a dash.

Whatascript:
What are the possible time indications?

Formatman:
There are basically 2 choices:

Whatascript:
Any exception to this rule of the 3 elements?

Formatman:
Yes. One of them is when the scene takes place in space. Then there is no DAY or NIGHT.
This is an example from "Star Wars: Attack of the Clones", written by George Lucas:

Whatascript:
What about if a scene takes place inside the starship freighter? how does the screenplay format look like?

Formatman:
Then the rule of the 3 elements applies again:

Whatascript:
If something happens when daylight first begins, would you replace DAY by DAWN?

Formatman:
Only if it is essential to the story. Otherwise DAY will be enough.

The same applies to MORNING and AFTERNOON.

This is an example of the use of DAWN. It comes from the script "Enemy of the State" from David Marconi:

Whatascript:
Why does it matter to specify DAY or NIGHT?

Formatman:
This is again to assess the budget of a movie.

Night scenes are more expensive - they require powerful lighting and the crew gets paid night rate.

The screenplay "Broken Arrow", written by Graham Yost about the theft of a nuclear weapon, is reported to have gotten rid of the night scenes to cut budget and therefore save millions of dollars.

Whatascript:
Some screenwriters use screenplay format expressions like LATER or MOMENTS LATER. When to use them?

Formatman:
When a scene shortly follows another. There is one condition though, both scenes need to take place in the very same location.

This is an example from Good Will Hunting written by Matt Damon and Ben Affleck:

Whatascript:
What if a scene takes place at the same time as the previous one?

Formatman:
You then use CONTINUOUS or SAME.
This is an example from "Enemy of the State", written by David Marconi.

Whatascript:
How about a scene that happens in a specific year. How do you mention it?

Formatman:
You add the year in brackets after the time.

See also the 5th formatting commandment: "Thou shalt direct without using camera directions" for the use of time within a scene.

Whatascript:
Screenplay format has general rules. We talked about the application of the master scene headings. Do they have as well some general rules?

Formatman:
Yes. I'll give you a few:

Formatman:
Correct. They are called secondary scene headings. You use them to draw the attention of the reader to a place, person or object within a scene.

I talk about them in the fifth commandment of screenplay format:
"Thou shalt direct without using camera directions"

Whatascript:
This concludes this interview on this second formatting commandment "Thou shalt not let the reader get lost". Thank you, Formatman.

The 10 commandments of screenplay format -
Find out about the third commandment:

Thou shalt not slow down the reader

Remember the last time you were home?*: