Spice up your movie dialogue with the repetition technique 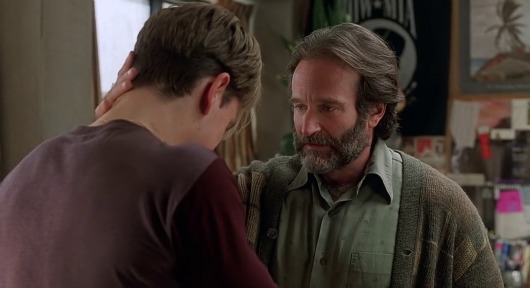 Whatascript interviews an expert to get to the bottom of this movie dialogue technique.

Meet Sean Maguire, one of the main characters of the screenplay Good Will Hunting, written by Matt Damon & Ben Affleck.

David, aka Blablator and myself visited Sean Maguire at his College just before he left for India.

We entered his class and got immediately greeted:

Sean
Well, it seems we're in the presence of greatness, Blablator!

Class, do you know what a movie dialogue expert is? This is someone who challenges you in every way while you write. Who takes you places, opens things up for you with words.

Okay, class, that's all for today.

Blablator:
Good to see you, Sean.

You have experience with the repetition dialogue technique and I wanted to hear your personal views on that.

Sean
How many people did you try before you came to me?

Well, repetition is the most important component in making a point with another character.

In some dramatic / climactic situations you need to repeat yourself to get through the other character and interrupt the course of things. And that should be the goal of any good character at that moment.

What a script!:
Any example of how you use this movie dialogue technique?

Sean
There's this patient of mine - I treated him some time back for amnesia problems and headaches. He was constantly on the run and used the repetition technique a lot.

He turned out to be an ex-assassin. Do you have any idea of the odds of having a killer as patient?

Anyway, at some point he was in the American Embassy in Zurich, Switzerland, and gets called upon by the security chief.

Later on, while he was in his apartment in Paris, he got attacked by a man who sprang through the window. He neutralized him and asked him these questions:

Blablator:
The repetition movie dialogue technique is effectively used a lot in the action and thriller genre. It adds adrenaline to the picture.

It is also used in dramas. See an example here from Dead Poets Society.

Let's come back to you and some examples of your own life, in your own genre, the drama.

The first example is my answer to Will's question if I'd be better off if I never met my wife because of the pain I feel now she's dead?

Blablator:
Using both the repetition and the list movie dialogue techniques. is a very clever way to reinforce the point you're making.

That's also a great way to create a flow, a rythm in this dialogue.

Besides these few lines convey your back story in a very elegant way. No Bob, his friends and family involved here to provide this information. It all comes naturally.

And your second example of the application of this movie dialogue technique?

Sean:
This is the climax scene, the structure turning point # 5, between Will and me.

And Will echoes this line with his own line, that he repeats, and repeats.

And the more I get through to Will, the stronger my line becomes and the weaker his own line gets to be.

Many screenwriters stole my line later on. It was pretty impressive, actually.

Whatascript:
How did you know this movie dialogue technique would be perfect?

Sean:
As a screenwriter, you're not perfect. And let me save you the suspense, this movie dialogue technique isn't either. The question is, whether or not you're perfect for each other. You can know everything in the world, but the only way you're findin' that one out is by giving it a shot and using it when writing.

And like my friend Aaron Sorkin would say, listen to its music.

One last thing:
the point you want to make, you know... nail 'it, keep repeating it, that's always been my motto.

Blablator:
Well, I think that's a super philosophy Sean*, that way you can go through an entire scene without ever having to really say anything else.

Some Private lost three brothers and got a ticket home*: