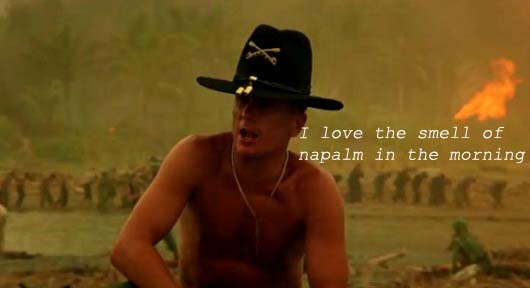 If you missed the first two parts of this series, you may want to check them out first.
Here is the link to Part 1, where it all started.

What a script!:
While in Dudeville I interviewed Cool Dude, an expert on how to create compelling characters.
He stressed the importance of knowing your characters as much as you know yourself. Are you saying the same applies to movie dialogue?

Blablator:
Definitely. It's your access to write great dialogue.

Consider something. You, me, everybody, we do not see the world the same way.
Our view of life is colored by our past - our experiences, our education, our decisions etc. - and the meaning we gave to everything that happened to us.

And our behaviors and actions are in line with our view of life.

What a script!:
Can you please give us some examples?

Blablator:
I'll do better than that. I have a quiz for you. It's called: Who said it?
I give you 3 characters who have some things in common and 3 movie dialogue quotes.
Your job is to match the characters with the quotes based on a short summary of each character's past / view of life.

Will Hunting, from the screenplay Good Will Hunting, written by Matt Damon and Ben Affleck.
He's in his 20's, a mathematician genius, a past of orphan, abuse and violence. He trusts no-one, does not know what he wants to do with his life, does not dare to commit and fights with everyone - verbally or physically - except with his friends.

Homer Welles, from the screenplay The Cider House rules, written by John Irving.
He's also in his 20's. He's been raised by Dr Larch whom he assists in performing abortions although he does not agree to it. He decides to leave the orphanage where he spent all his life to discover the world and what he wants to do with his life.

Sam Monroe, from the screenplay Life as a House, written by Mark Andrus.
He's 16, cynical, fights against his divorced parents, thinks he's nothing and spends his time getting high.

And now the quotes:
a) "Why can't you all just die and leave me alone!"
b) You think I'm afraid of you, you big fuck? You're crowdin' the plate.
c) Killing mice is as close as I want to come to playing God.

Did you guess who says what? Check the results here

Although these characters have something in common - they are all young, orphans or feel alone - the way they see life is very different. And as a result they speak very differently.

Sam could not say "Killing mice is as close as I want to come to playing God". It would just not fit.
But when he says "Why can't you all just die and leave me alone", we get it. We get the rage, the frustration, and at the same time the cry for help.

The same applies to Homer. Imagine the following lines coming out of his mouth: "You think I'm afraid of you, you big fuck? You're crowdin' the plate." It would not work either. That's not Homer.
But when he says "Killing mice is as close as I want to come to playing God" we get the moral conflict he faces every time he helps performing abortion.

Will could not say either "why can't you all just die and leave me alone!". Only a victim would say that, and Will is not a victim. He's a fighter. So this quote would not fit his character.

What a script!:
What's the link between this rule and writing great movie dialogue?

Blablator:
You could say it's a prerequisite.

Imagine you have created great dialogues. They are sharp and really work. You are really happy about them. Congratulations!

Only problem is ... we don't care about hearing them. Oops!

Why? because we do not care about those who say them. These characters leave us indifferent - we are not moved, inspired or triggered by them. Actually, as far as we are concerned they might as well shut up or even die.

This is by the way one of the Top 7 Flaws of a Bad Screenplay.

How to avoid that?

Create characters we root and/or care for.

We created a whole series of articles about how to write compelling characters.

Hannibal Lecter, the well-educated and refined killer who eats his victims in the screenplay written by Ted Tally, The Silence of the Lambs, is not a character the audience loves.

But he fascinates. So when he says

He's reckless, loves the smell of napalm in the morning, puts the Walkyrie on in his chopper to "start the dance" (i.e. the attack against the enemy) and tells his men to go surfing while being under fire.

He has a very strong and exentric personality, which has us be intrigued - if not fascinated.

Results of the quiz of movie dialogue rule # 7

The pairs to match were:

Will Hunting:
- b) You think I'm afraid of you, you big fuck? You're crowdin' the plate.

Homer Welles:
- c) Killing mice is as close as I want to come to playing God.

Sam Monroe:
- a) Why can't you all just die and leave me alone!

Find out about the next movie dialogue rules

* Josh in "Life as a House", screenplay written by Mark Andrus