Spice up your movie dialogue with the juxtaposition technique 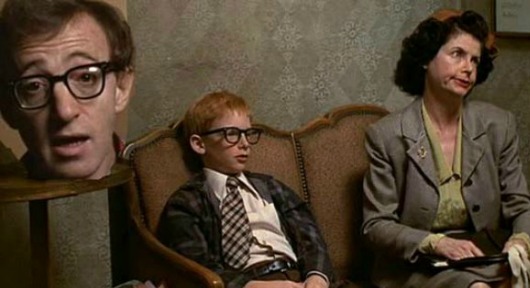 Whatascript interviews a juxtaposition expert to get to the bottom of this movie dialogue technique.

Whatascript!:
Mr Singer, what is your relationship to movie dialogue technique?

Whatascript!:
Mr Singer, this juxtaposition movie dialogue technique, how does it work?

Alvy Singer:
Well, it goes like this. You-you take a sentence, uh, and-and-and you take another one, that-that is completely unrelated, and, uh, you put them together.

Whatascript!:
And the purpose of this technique is?

Alvy Singer:
To surprise and cause a-a funny contrast.

Whatascript!:
Can you give us an example?

Alvy Singer:
If I-I take the sentence, uh,"I'm not-I'm not a morose type. I'm not a depressive character. I-I-I, uh, you know, I was a reasonably happy kid, I guess." There-there is nothing special about that, right?
If I-I then take the sentence " I-I was brought up in Brooklyn during World War II", there-there is nothing funny about that either. But, if-if I put them to-together, bingo! You-you're left surprised.

Whatascript!:
Can you give us another example of how you use this dialogue technique?

Alvy Singer:
There-there is this moment with Annie - we-we just saw this-this wonderful film, "The Sorrow and the Pity" about the German occupation in France and-and I say:

Whatascript!:
Can you create the same juxtaposition effect with one word instead of a sentence?

Alvy Singer:
Sure. I-I'm with Annie and we-we stand in line in the movie theater. And-and-and there is-there is this guy, uh, you know, so full of himself, and, he pontificates, he-he talks, uh, all the time to-to impress his new girlfriend.

And-and he's spitting on my neck when he talks. And-and he talks about the-the last Fellini film, that-that it lacks a cohesive structure, and-and I-I listen and I'm-I'm-I'm gonna have a stroke.

Alvy Singer:
I've-I've just met Annie and we-we talk about my analyst. And-and I-I say that I see him for fifteen years. And-and Annie is surprised, so, uh, she says: "Fifteen years?". So I say, and-and again this-this is the juxtaposition part:

I want to be home for dinner*: