Spice up your movie dialogue with the setup and payoff technique

Today, the setup and payoff technique. 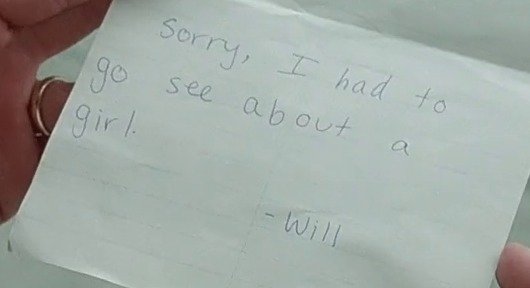 We asked David - aka Blablator, our dialogue expert, to lead us through this technique.

Blablator:
This is a movie dialogue technique that's made of 2 steps:

-- in the first step a character says something that sounds ordinary, sometimes anecdotic, basically a throwaway; that's the setup

-- in the second step the same character or another one who heard the setup line repeats it or makes a variation around it; that's the payoff.

In some cases, especially when the same character takes care of both the setup and payoff, the payoff is played more than once, to increase the comic effect.

In some cases, when the setup line is actually crucial in the story - although it doesn't look like it at the time the setup line is spoken - the payoff is played only at the end of the screenplay, i.e. at the climax or at the conclusion.

Whatascript!:
You mentioned a comic effect, are there other effects intended with this movie dialogue technique?

Whatascript!:
Any example illustrating the same character applying both steps of this setup and payoff movie dialogue technique?

Blablator:
Yes, it's from Basic Instinct.

As you know, Johnny Boz, her boy-friend is found dead at the very start of the screenplay, and the detectives Nick Curran and Gus Moran, as well as the Lt Walker are at the crime scene.

Note: these examples are re-formatted to show the setup and payoff next to each other. 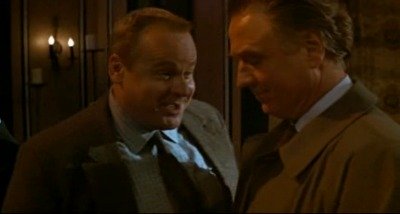 This is the first payoff.

This is the second and final payoff.

By the way, the sentence "he got off before he got offed" is an example of another movie dialogue technique, called "homophone": you use words that sound the same but have a different meaning. It is often used to cause a comic effect.

Whatascript!:
Any example of this movie dialogue technique when the setup and payoff lines are said by 2 different characters?

Blablator:
Yes. These examples come from the screenplay Good Will Hunting.

When there are 2 characters involved, it's like if the first character "gives" something to the other character at the setup. And that something could be funny, sarcastic, offensive or anything else.

And later on, in the same scene, or in a different scene, the other character "gives it back". That's the pay-off. This line, when it is used for the second time, echoes with what got said before.

Will Hunting, who works as a janitor at MIT, gets caught red-handed by Professor Lambeau while writing the solution of a math proof on the chalkboard. He doesn't show up the next day at work.

His friend Morgan (right on the picture) teases him about losing his job. Chuckie and Billy (left and right in the back), participate to the conversation. 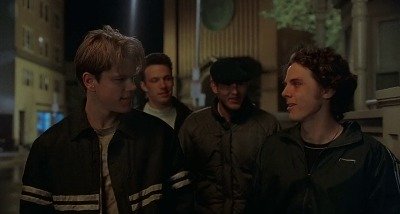 Notice again the use of the trigger movie dialogue technique. The words "push a fuckin'broom" get followed by "pushing a broom".

Notice again the use of the trigger movie dialogue technique after the setup line "Management was restructurin', which is followed by "restructurin' the amount of retards".

Will tells the therapist he's assigned to, Sean Maguire, that he met a girl, Skylar and had a good time with her. 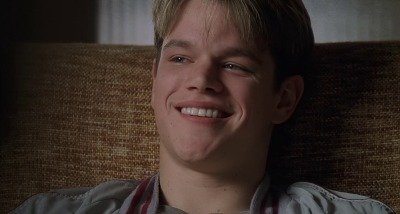 He's however afraid of going out again with her. Sean tells him he's an amateur.

This is the setup, immediately followed by the payoff and another setup, which will be paid off a bit later:

The "Time's up" which ends this scene is itself the payoff of a setup line that Will said during the first encounter he had with Sean.

In that scene Will was very obnoxious. Their meeting escalated into a physical argument, that Will ended up by: "Time's up" - in reference to their sessions that lasted one hour.

Sean in a session with Will about the question: "what do you want"

The scene goes on until:

And this is the payoff. 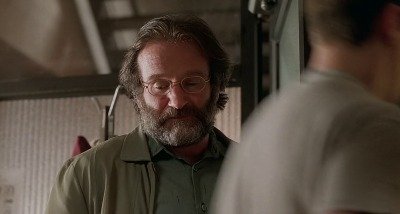 Whatascript!:
You mentioned that in some cases the first element of this movie dialogue technique (setup) gets only paid off at the end of the screenplay when it plays an important role in the story. Any example?

Blablator:
Again, from Good Will Hunting.

All the lines used in above examples were basically said to pay someone back.

This one is not. It's an acknowledgment from Will to Sean for the difference he made in his life.

It shows also the transformation of Will, who's now ready to trust himself and someone else (Sean).

Last example of this movie dialogue technique. Sean in a session with Will about when he met his wife and knew she was the one. 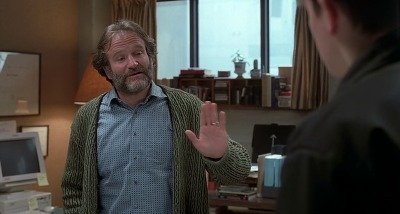 This is the setup which happens after 1 hour and 5 minutes.

The second element of this movie dialogue technique (payoff) only happens in the last scene of the screenplay, i.e. 1 hour later when Will finally knows what he wants. He turns down the job offered and decides to go to California to join his girl friend Skylar.

Will slips an envelope in Sean's mailbox and drives away.

Go from Setup and Payoff Movie Dialogue Technique to