The "Truth" about the 5 Movie Dialogue Functions (Part 5) 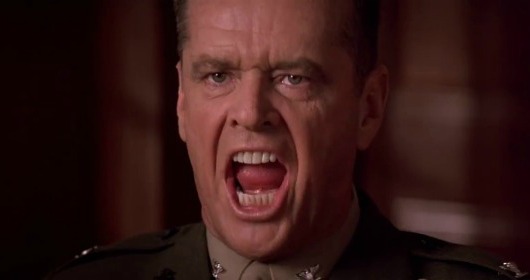 Whatascript!:
Colonel, you covered so far for us the basics of dialogue and four of its 5 movie dialogue functions:

Can you tell us your views on the last of these 5 movie dialogue functions: calling forth emotions?

Col. Jessep:
Think of the screenplays or movies you like.

Many times a character says something and it echoes where you are. You get moved, angry, sad, joyful.

Whatascript!:
Colonel, can you give us some examples of the application of this movie dialogue function?

Col. Jessep:
If you paid attention, you'll have noticed that basically all the examples I gave about

They elicit an emotion while you hear them, right?.

The same applies to the last scene of my story, when this Danny boy with his Harvard mouth and faggoty uniform puts a whole nation in jeopardy by having me arrested.

How dare did he play a trick on me? I gave him his freedom by risking my life every day.


Everybody in the court was filled with anger. And wanted to grab the bastard.

And then everybody got filled with a feeling of injustice. Everyone was just dumfounded, flabbergasted, stupefied, and ...

Col. Jessep:
Right! JESSEP (continuing) You fuckin' people. (beat) You have no idea how to defend a nation. (continuing; to KAFFEE) All you did was weaken a country today, Kaffee. That's all you did. You put people in danger. Sweet dreams, son.

Whatascript!:
Colonel, these were effectively very ... uh ... dramatic circumstances.
Any other example - outside your own domain - maybe less tragic?

Col. Jessep:
Yes, son. It's about a man fighting. Not the Cubans like I did, but another big C, terminal cancer.

In this scene, George, from the screenplay Life as A House written by Mark Andrus, tells his estranged son, Sam he's dying.

Col. Jessep:
At least this George guy, got appreciated.

Whatascript!:
Yes. Hmm. Colonel, this concludes our series of interviews about the 5 movie dialogue functions. Thank you for coming out of your jail and speaking to me.

Whatascript!:
You believe that, don't you Colonel, that I'm thankful?

I'm a screenwriter and a reporter of a great country and I'd prefer deal with the bullets and the bombs and the blood than spending 5 more minutes with you, and your condescending arrogance, son...ofabitch.

Guard, the prisoner is excused!

I'll be home after lunch*:

* Life as a House, screenplay written by Mark Andrus