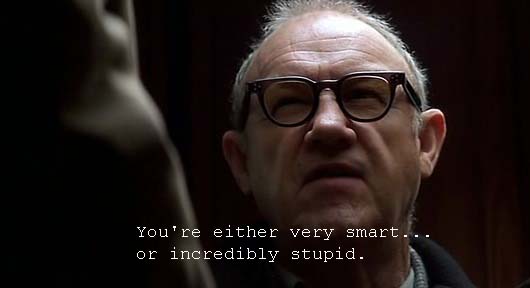 If you missed the first four parts of this series, you may want to check them out first.
Here is the link to Part 1, where it all started.

What a script!:
Forgive my ignorance, but who's Bob?

Blablator:
Bob is one of the most used characters in screenplays written by beginners.

What a script!:
What makes him so popular?

1. He's always there when a screenwriter wants to provide backstory or technical information to the audience.

2. He's a great listener and doesn't say much while being litterally "bombarded" with data

Blablator:
As a matter of fact, yes!

We call this movie dialogue practice - that you must avoid at all costs: "As you know, Bob".
Sounds familiar?

What a script!:
I remember Mel Brooks, Thomas Meehan and Ronny Graham making jokes about "Bob" in their screenplay "Spaceballs".

Correct.
In their script, Dark Helmet has been given the order to replenish the supply of air of the Spaceball planet by taking every breath of air away from their peace-loving neighbor, Planet Druidia.
Only Lone Starr can prevent this evil plan to happen. There is a moment when Spaceball Colonel Sandurz explains the plan:

What a script!:
If you fire Bob, how do you deal with movie dialogue exposition then?

Blablator:
The best way is through conflict and/or action. This way, you give information to the audience without having them notice it.

Here is a great example of the application of this movie dialogue rule of firing Bob, and using conflict and action instead.

It comes from the film Enemy of the State, written by David Marconi.

The life of Robert Dean, a succesful young lawyer gets upside down when an old friend gives him - without his knowing - a tape containing the assassination of a politician.

In this scene Dean (right) and Brill, an ex NSA agent, argue about the listening devices that Brill discovered on Dean. While they talk on the rooftop of a hotel, the NSA rushes into the hotel lobby. 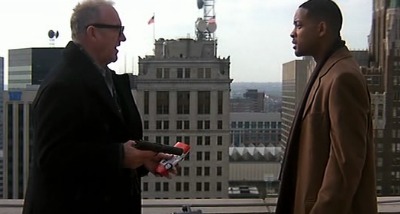 What a script!:
If I follow this movie dialogue rule, I should fire Bob. But you said that his family and friends should be fired too. Who are they?

Blablator:
In Bob's family we find some variances of the "as you know Bob..." practice. For example:
- let me get this straight, or
- tell me again, or
- are you saying ...?

Bob's friends are made of these reminders or information to the audience that do not sound natural or logical. A few examples:

* "The Lord of the Rings: The Return of the King", screenplay written by Fran Walsh & Philippa Boyens & Peter Jackson